Porcelain busts on a handmade and glazed ceramic console,
all consoles with musical box mechanism (each with the same melody: «For Elise» by Ludwig van Beethoven)
Porcelain busts: applied with a ceramic eye-beam and painted over with porcelain cold colours, gilded with 24 carat gold leaf 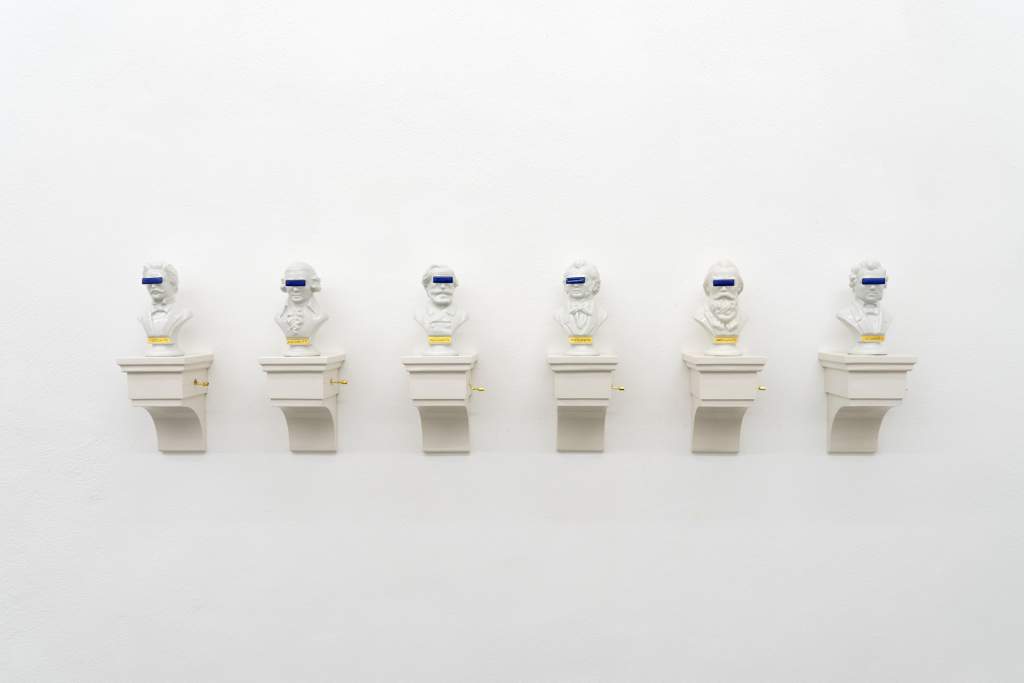 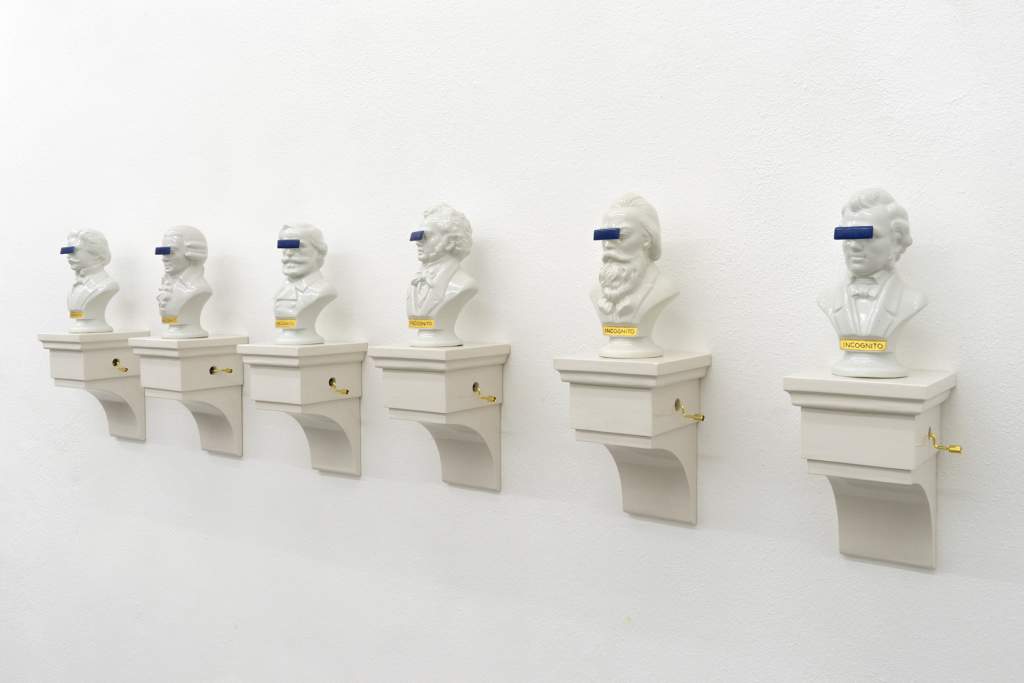 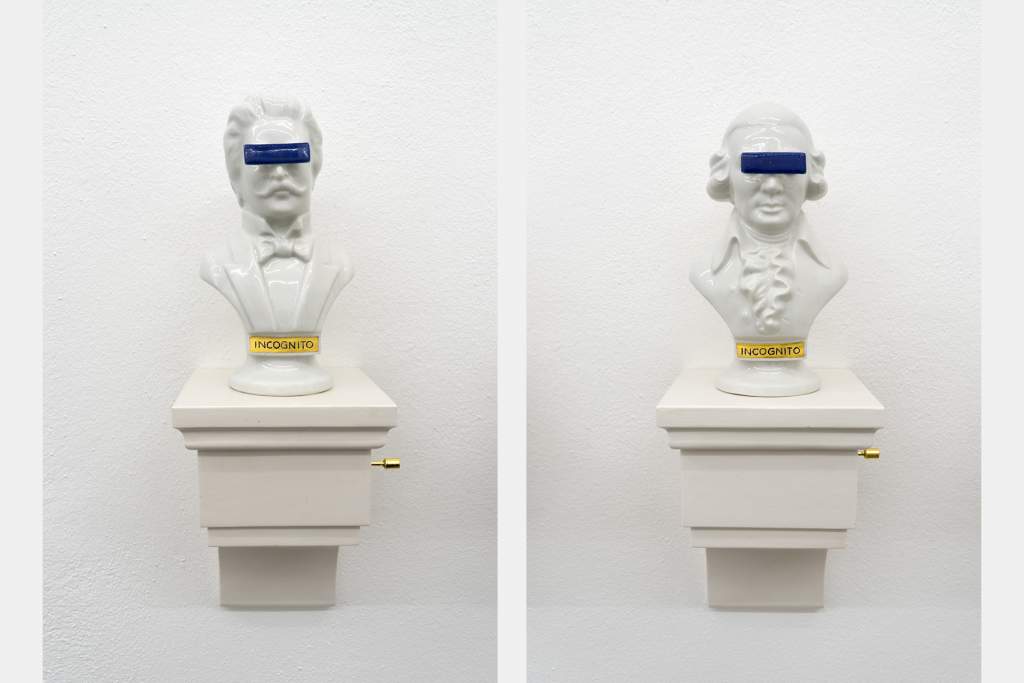 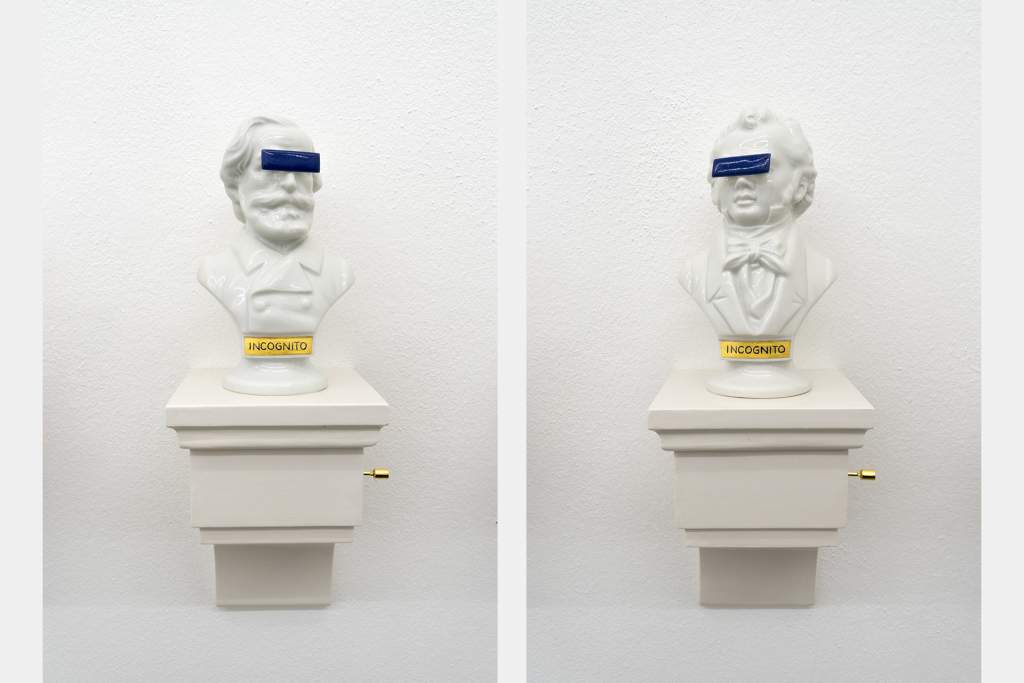 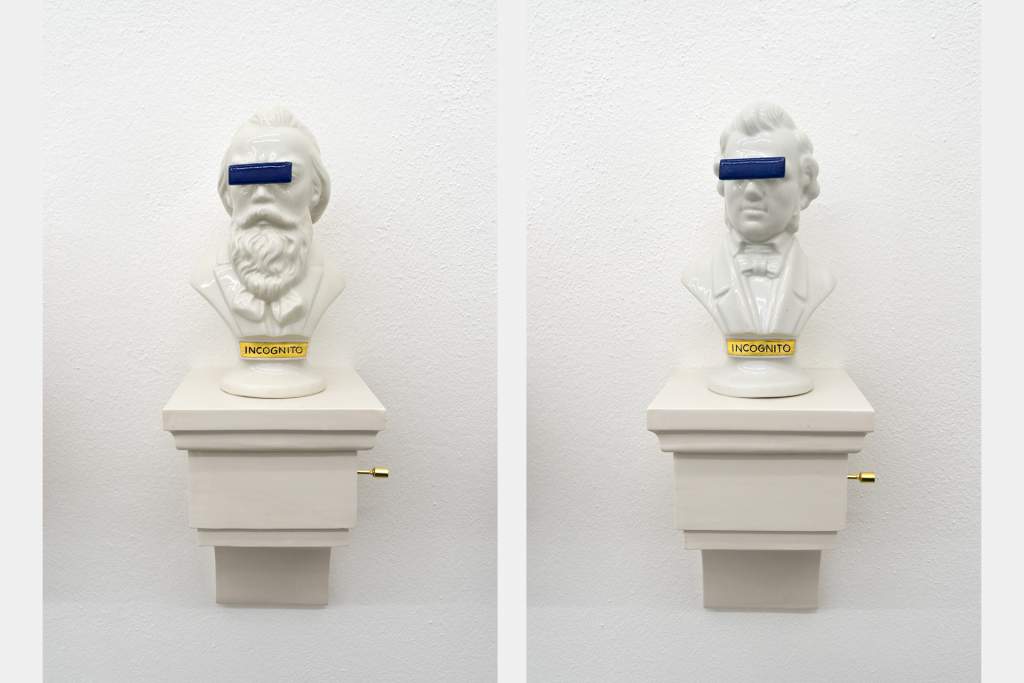 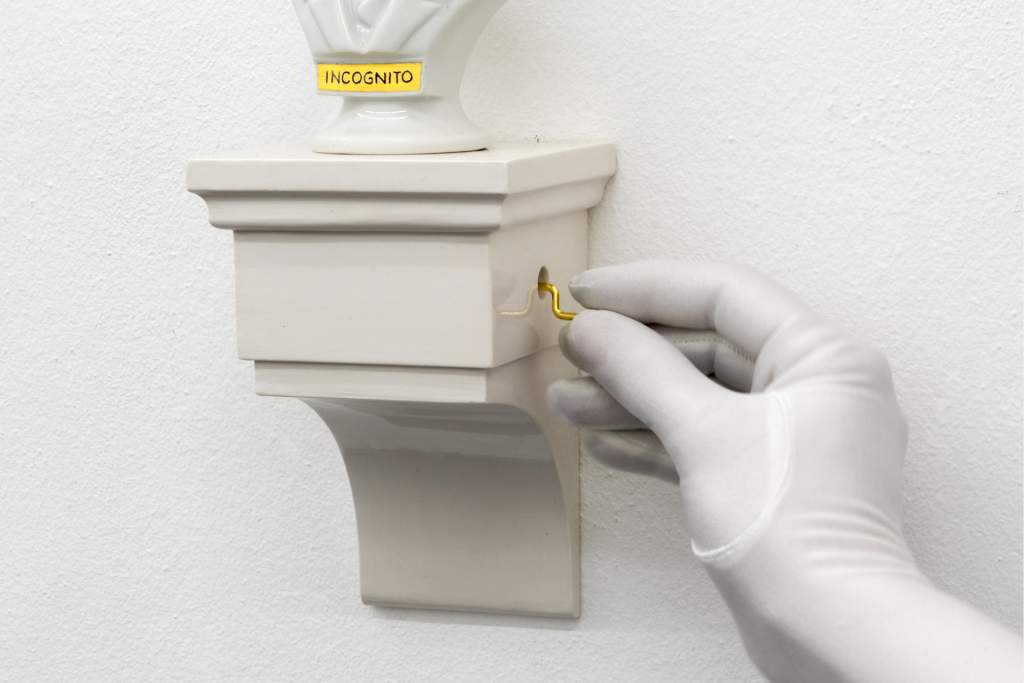 ELISE, SHUT UP! HD - 9:15 minutes
A video project by Dana Widawski
with a composition by

A pianist and hands on six musical boxes fight a duel for and with Beethoven's - to the point of weariness copied - melody 'For Elise'. The mechanics of the musical boxes are placed in consoles, each of which bears anonymised busts of other famous composers, though only Beethoven himself can be heard in the ensemble. In 6 variations, his commercially exploited bagatelle is lovingly caressed, twisted, sliced, then at last buried, through both analogue and digital means. The video project 'Elise, shut up!' is a dialogue between Dana Widawski's sound sculptures and Andreas F. Staffel's music, something to be naturally seen as well as heard.

TO THE PROJECT »ELISE, SHUT UP!«

Much to the delight (or disdain) of parents, budding piano virtuosos cannot stay away from Beethoven's bagatelle 'For Elise', regardless of whether they’re using an analogue in-person teacher, or the latest digital app. The opening chords have proven equally popular as telephone hold music, or when sounding from battery chargers on construction sites, in fierce competition with the radio’s ‘best hits’. Somewhat more pleasant takes on the piece can be found in the form of references in pop and rock songs, or the films of directors such as Wilder, Visconti and Tarantino.

This is all made possible thanks to its royalty-free status, and is certainly also one reason for its popularity. Another, not unimportant reason, is the melody itself: 'Für Elise' is so perfectly arranged in harmony and beauty, that even software which produced algorithm-composed music turns green with envy. The catchy opening bars of the piece serve as a longing for melancholy in the public domain, and through the passage of time has mutated into a folk melody apparently lacking an author.

The authorship question is ignored by Dana Widawski with her musical box sculptures 'Tribute to Beethoven', created for the Beethoven Jubilee 2020. Six porcelain busts of different composers stand on finely crafted ceramic consoles, none of which bear a resemblance to Ludwig himself. With a bar covering their eyes, and equipped with the words 'incognito', the masters remain without identity. The musical box mechanism built into the consoles -all- play 'For Elise'. In order to push the independence of the melody even further to the extreme, the Berlin artist commissioned the composer and pianist Andreas F. Staffel to devise a composition for her six sound sculptures and a piano. The fusion of music and sculpture have resulted in an independent video artwork entitled 'Elise, shut up!’

Staffel's composition sees the piano and musical boxes compete against each other across six variations. Though initially a civilised exchange, the piece escalates into a violent conflict... Shut up! Silence. The renewed rebellion is followed by a swan song. Play me the song of death. Finally, the melody is buried in a canon of decrescendo until it disintegrates into its component parts.

Widawski converts the composition visually in a minimalist manner, with even the fronts are also clearly defined in the image composition. In the lower third of the projection area a piano can be seen overhead, above it two rows of three busts, each with their own consoles. The musical boxes are played by white-gloved hands, seen and heard as separate entities, whilst the pianist's bare hands complete their instrument’s contribution. Sounds of digitally manipulated musical boxes are also used, which appear in the video as if they had been recorded with analogue technology. The visual and acoustic mixing of the different plains of sound creates an irritation with which the melody’s source can no longer be recognised.

The reverberation goes beyond the silence of 'Elise', and it seems that Widawski and Staffel's collaboration could lead to future projects.