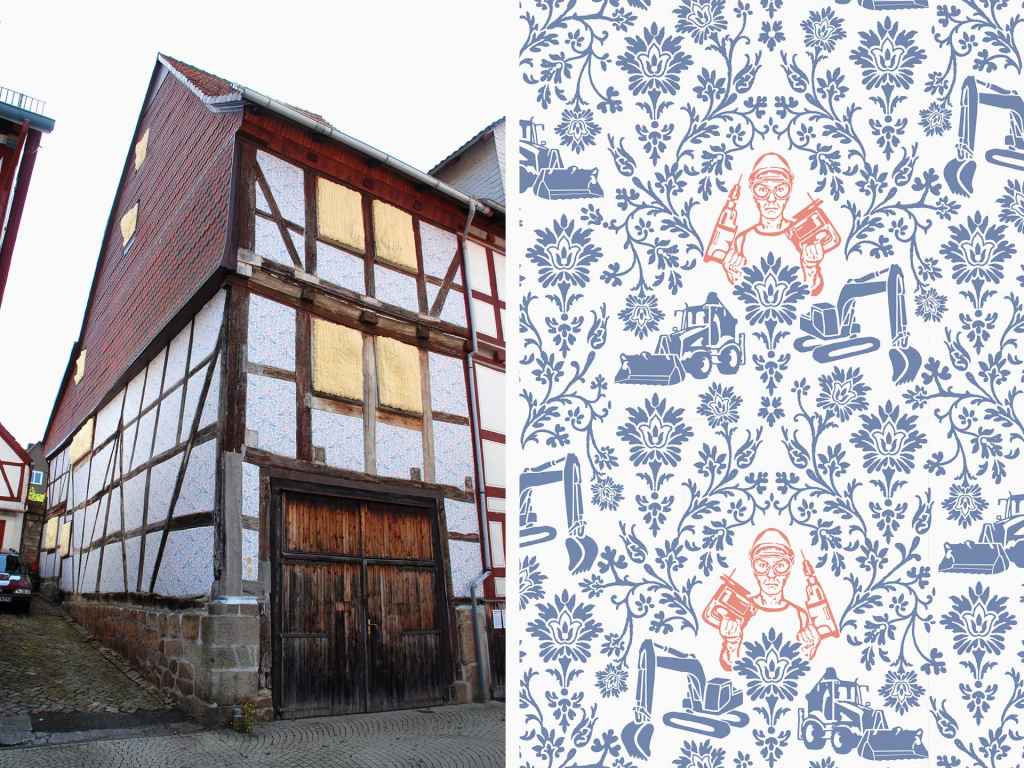 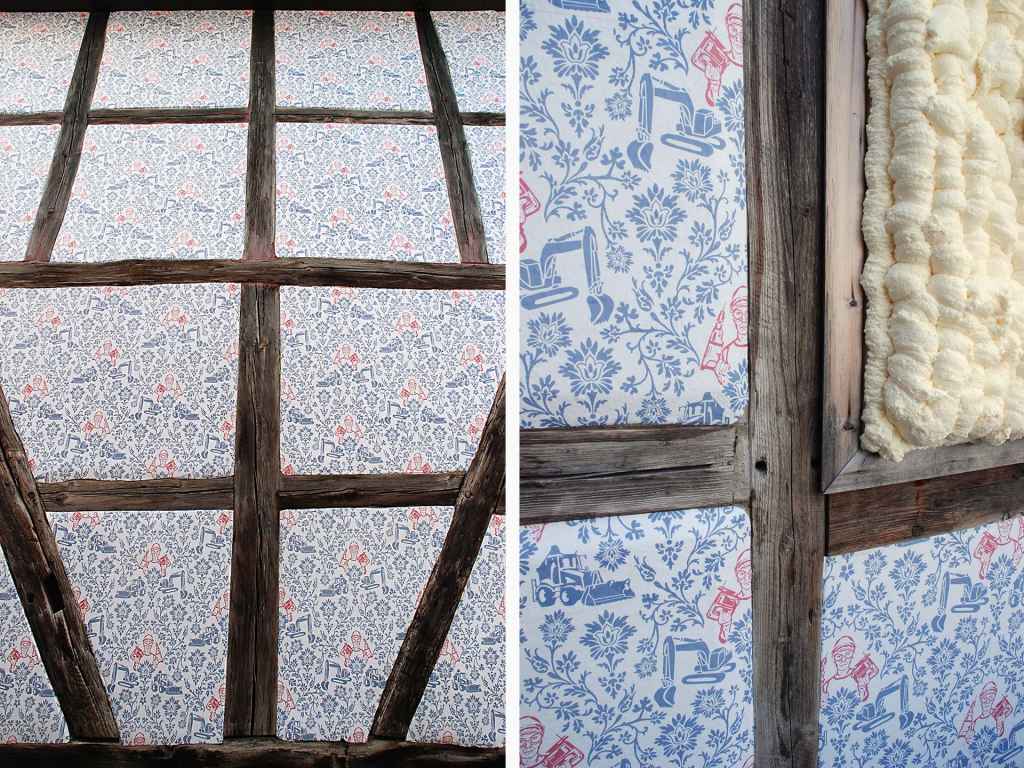 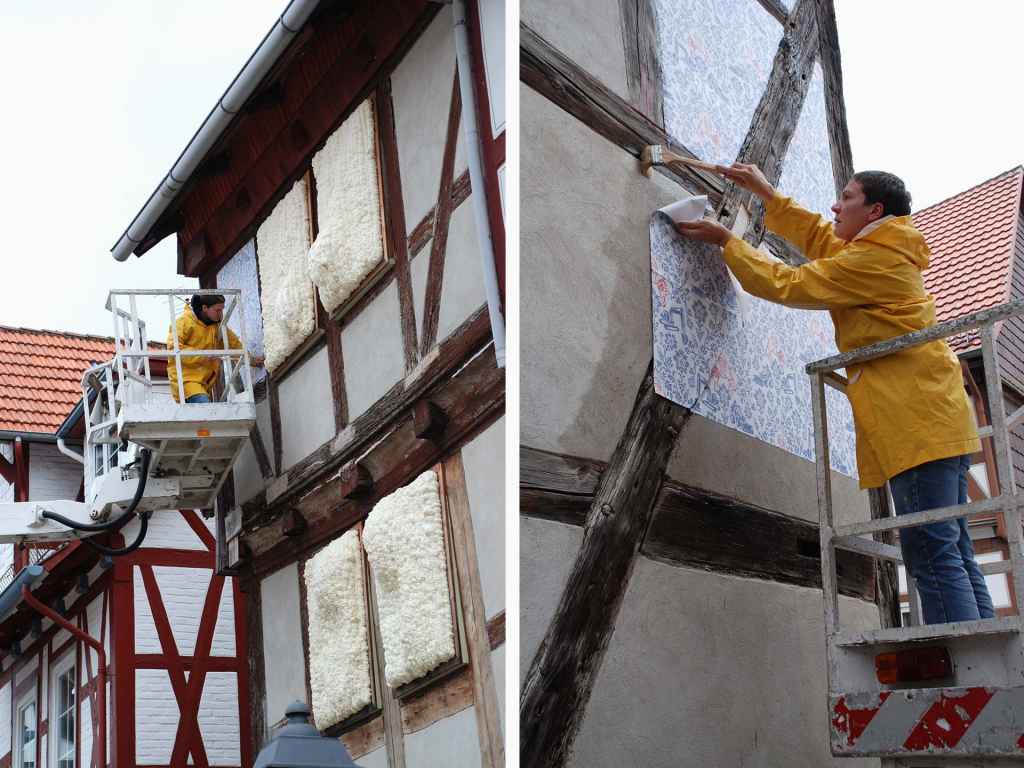 My Home is my Hobby

The idea for the two corresponding works by Dana Widawski and Frank Benno Junghanns on the façade of the house at Bädergasse 10 arose spontaneously after the first visit, during the trip home on the motorway.

The two artists from Berlin found a small neat town, which, despite the good infrastructure and maintenance, appeared to them like an abandoned village. The stillness behind the façades of the heritage-protected historic centre stemmed from the widespread vacancy, most of which nevertheless could not be used for the exhibition project AltStadt-Neu [Old Town New]. This was because great chaos reigned behind all of the restored façades: dilapidation, restrictions imposed by fire regulations, never-ending building sites, and the reservations of owners that perhaps the buildings – or even the «sleepy town» – could awake.

The tension between the inner and outer world drove the artists to link this state with the theme implied in the title of the exhibition AltStadt-Neu of rebuilding your own home.

The decisive impulse for the character of this work was provided by the visit to the assigned house – in regards to the choice of material as well as the decision to work on the house from the outside. The latter decision was inevitable when Junghanns almost fell through the ceiling during the visit. The previous owner, a passionate do-it-yourselfer, was not able to fulfil his ambitious plans during his lifetime and to free the building from construction chaos. The house was at that moment for sale.

Frank Benno Junghanns employed – inspired by the still visible and excessive use of insulating foam in every possible crack and empty space – his preferred material for sculptural light construction projects: polyurethane foam. His spontaneous desire to completely fill this half-timbered house – which almost caused him to plummet into an abyss and aroused in a city-dweller like him claustrophobia – with building foam, was hindered only by the high costs, the lack of property rights to the house, and the much too potent – if appealing – provocative effect of such a proposal. With the help of a few hundred litres of insulating foam Frank Benno Junghanns simply continued the labour of the former owner and isolated the house entirely. He carried this out according to all the– nonexistent – rules of DIY work. The associations of template printing in old half-timbered houses recalled Widawski’s long-held plans for wallpaper, in which she breaks with the traditional ornaments by means of stylised motifs of impressions drawn from everyday life. With this combination she transforms the dignified wallpaper of the «parlour room», at first sight exuding comfort and cosiness, into a design element reflecting the environment and – at second sight – irritating.

Dana Widawski transposed the martial quality of the building foam proposal by Junghanns to the image of the do-it-yourselfer, who dreams of great projects, and combined it with a floral subject alluding to traditional wallpaper motifs.

With this «turning inside out» of what actually is only to be found inside, the two wanted to create a metaphor – in an absurd dimension – for making a beautiful façade, behind which an average do-it-yourselfer has barricaded or even isolated him – or herself.

Insulating foam and wallpaper, moreover, symbolise here a tendency to surface cosmetics that is not just financially motivated but particularly contemporary and intimately tied to an effortless move from the appropriation of old craftwork to a temporarily conceived DIY store aesthetic.

Which also raises the question of how one should – and can today – truly deal with the old, landmarked building substance of Spangenberg: Nice façade, but what’s behind it?